Why I commissioned... LEGACY OF FIRE 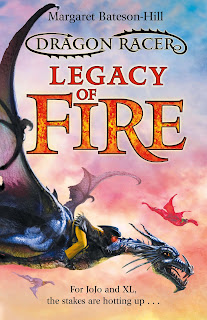 Twitter-style summary: Joanna is struggling to come to terms with the responsibilities she's inherited, but it isn't long before she and XL are flying into danger.

Legacy of Fire is the second book in the Dragon Racer series by Margaret Bateson-Hill. Like its predecessor, Legacy of Fire is a speedy read with high-octane (OK, so not octane, that would be dangerous given we're talking about fire-breathing dragons... high-adrenaline?) action sympathetic characters and fantastic finishing touches.

In this book, Joanna ‘Jojo’ Morris, youngest ever world champion dragon racer, is struggling to come to terms with the loss of her mentor, Vincent, and the awesome responsibility of inheriting the Brixton Caves – and the politics that come with it. Feeling lost in a world that she's meant to dominate, Joanna finds herself losing touch with her trainer the wonderfully prickly Spiky Mike, feuding with Isaac, the new egg-turner and competing with her first ever crush, new dragon racer Dominic Peters. Only her beloved Excelsior seems to understand her. But Joanna has bigger things to worry about. Supervillain Marius King might be locked up in jail for the crimes he committed in the last book, but he's plotting a revenge that will bring the dragon racing world to its knees...

Although the story is fast and tight, it's Margaret's grasp of the obsessive nature of a young reader that draws me in. Having spent a lot of time in schools and libraries she knows the details that make a setting come alive: how do you mind blend with a dragon? What would you wear? Who would you meet? The wide cast of characters provides something for everyone whilst simultaneously giving Joanna something to rail against, yet run to for comfort.

Ostensibly this is a series about the excitement of a dream come true, but it also gives gentle insight into the weight of responsibility that comes with excelling at something before you've the maturity to handle the consequences. And it's about friendship, finding it, keeping it and valuing it. Only Joanna also has something we all covet – a gregarious dragon for a best friend. Of course.

Margaret made her own book trailer for this, which you can check out here. And there's a dedocated Dragon Racer website at www.jojodragonflyer.co.uk too.