The last couple of years I've spent the four days of the Bologna Book Fair angrily refreshing my twitter feed and wishing I was there tweeting about coffee and gelato and the Book of the Fair.
This year I went to Bologna. Unfortunately my phone and I had different ideas about the whole tweeting thing and I lost - ergo no tweets. Stupid phone.
But the point of going wasn't to just wander around and tweet about the fair, it was to experience it. It was a lovely thing to do, mainlining espresso and looking at all the lovely books other publishers are putting out there, perusing illustrators' wares, judging books by their covers and meeting up with people I don't see nearly often enough.
And then there was the shopping. I don't mean shoes and bags (no time for that), I mean shopping for NEW BOOKS! As I don't sell the rights to books (we have the wonderful Caroline Hill-Trevor on the case) I can focus on meeting up with agents and talking to them about what I'm looking for and what they have on their list.
The way 31-year-old Non feels about books is remarkably similar to the way 14-year-old Non felt about boys:
14-y-o Non: Fancied lots of boys. Some of them were taken. Some of them were out of her league.
31-y-o Non: Fancies lots of books. Some of them are taken. Some of them are out of my league.
14-y-o Non: Thought she had a type (bleached blonde hair with the roots growing through and piercings). Actually, she had many (she liked funny boys, clever boys, boys with dark hair, boys who were on the older end of the spectrum, boys who were closer to her own age, boys who had bad clothes but lots of potential)
31-y-o Non: Knows I have a type (something that makes me cry). Actually, I have many (I like funny books, clever books, books with dark themes, books for older readers, books which are closer to my own mental age of 3+, books which have bad titles but lots of potential)
14-y-o Non: Used to pester her mates who actually knew some boys to tell her about them. Were there any that they thought she'd like?
31-y-o Non: I consult professional agents who actually know some books to tell me about them. Are there any they think I'd like?
14-y-o Non: Would create elaborate fantasies about the boys she heard about - painted pictures with others' words and fell in love before she even spoke to the boy in question.
31-y-o Non: Creates elaborate fantasies about the books I hear about - briefing imagined covers with others' words and falling in love before I even read the book in question.
14-y-o Non: Suffered a lot of disappointment. And then fell in love with a wholly suitable boy, who lived up to his promise.
31-y-o Non: I am happy to suffer disappointment, because I am confident that I am about to fall in love with a wholly suitable book, which will live up to its promise.
Actually, I suspect I may fall in love with quite a few...
Posted by Catnip at Friday, March 23, 2012 No comments:

Why I commissioned… THE CASE OF THE CAMBRIDGE MUMMY 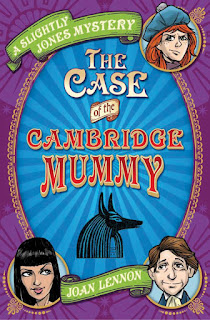 Twitter-style summary: A mummy runs amok in the Fitzwilliam museum smashing precious artefacts. Will Slightly’s superstitions get in the way of solving the case?

Slightly Jones is a thoroughly modern heroine railing against Victorian stereotypes that little girls should be seen and not heard. With her ferrety features and flyaway red hair, Slightly’s hard to miss and if you were to make such a mistake, she’d give you a piece of her mind for such rudeness.

This is the third in the Slightly Jones Mystery series, the first of which, The Case of the London Dragonfish, shortlisted for this year’s Scottish Children’s Book Awards. Each story features Slightly as our heroine solving mysteries with a spooky leaning set in famous museums around the . The first was set in the Natural History Museum in , the second in the Hunterian in and this one takes place in the hallowed halls of the in . Whilst Slightly’s already tackled ghosts in a cemetery and a mad professor, this time she’s facing something a little scarier – an Ancient Egyptian curse and a mummy to match.

The mysteries are cleverly plotted with just enough twists and turns for the young audience to keep guessing who the villain is without it becoming too frustratingly oblique and the historical settings are used to good effect. However, I think it’s my fondness for the wide and varied cast of characters that comes to the fore when I think of these stories. Fond as I am of Slightly’s sparky nature, I especially enjoy seeing her played against another character, perhaps the street-smarts of her nemesis/sidekick, Matthew Bone or the firm no-nonsense authority of Granny Tonic. Each book starts with someone coming to visit the boarding house run by Granny Tonic and the book will follow the story of one of the fellow boarders – so far we’ve saved Mr Thurgood the novelist nightwatchman from a crime he didn’t commit and quiet composer Mr Gentler from a family disaster – this time it’s feminine feminist Miss Forth’s turn…

A series that can be read independently of one another, but when read together form a happy, vibrant picture of a sleuth in training. Thoroughly pleasing to publish and a delight to read, with just enough danger to keep you on the edge of your seat and peopled by characters you really wish you could hang out with more.