Book fairs are a lot like speed dates between editors and agents: you have thirty minutes face time to impress 3-2-1 GO! (There isn’t actually a buzzer at the end – but I would like to state for the record that there really should be, I’m sure it would facilitate better time keeping.)

You’ve really got to make these meetings at London or Bologna count since they may be your only opportunity to actually see the people with whom you hope to build a lasting (professional) relationship. At each appointment, you've got to strike a balance between talking about yourself and listening to the person(s) opposite.

Sometimes I get frustrated at the sound of my own voice telling people how many books we publish; what kind (reissues, buy-ins, one picture book, one YA and everything else in between); what I’m looking for. Then I remind myself that it's extremely important to give agents an idea of my tastes, my passions, my editorial proclivities. If I don't give them a clear impression of who I am as an editor, how can I expect them to send me the right kind of material?

So then it’s time for me to listen. As I do so, I’m thinking one thing:

Am I really in the market for this project?

Sometimes I stop a pitch before it gets going. I would never want to appear rude but since there’s only me at Catnip, if I don’t think something will fit, then there’s no one to disagree with me further down the line when the submission is sent over. Agents are busy people and I don’t want to waste their time chasing me in three months time for an answer I can give now.

Obviously if there’s even the slightest chance of a ‘yes’ to my question I’ll ask to see the submission. (Reviewing my meeting notes I see that I won’t have much time for sleeping over the next few months...)

But it's important to remember that although fairs are exciting and pitches might promise the world, it’s the writing that’ll deliver it. And I won't get to see that until I actually open the document.

Right, my thirty minutes is up. Time to move on to the next blog post. 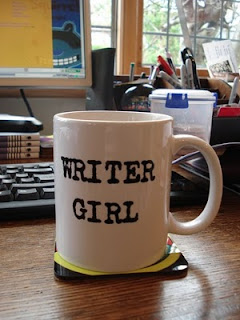 Welcome to the first entry of another regular feature where I photograph an obsession of mine (my mugs) and tell you about the mug featured.

WRITER GIRL mug was a Christmas present from the very lovely Cat Clarke, with whom I used to meet and swap writing. Since she now lives in Scotland, she gave me a mug to remind me to actually do some writing whenever I get the chance.

What actually happens is that I think about doing some writing, then make myself a cup of tea instead. Oh well.

I'm sort of hoping someone will buy me an EDITOR LADY mug so I can feel less guilty about drinking from this one when I'm on the day job...
Posted by Catnip at Tuesday, April 05, 2011 2 comments: