To celebrate this weekend's Digital Romance Festival, fabulous Catnip author Keris Stainton and I are going on a blog date. I put on my best, most romantic outfit and my most seductive facial expression (I will leave you to imagine that) and then I locked Keris in my interview room (currently decorated in hearts and renamed The Catnip Lurve Cafe).

We talked about Keris's heart-melting and fabulous new book Starring Kitty (out 10 July) and then we played a game of 'Make Your Own Romance Novel'. Enjoy and feel the lurve! 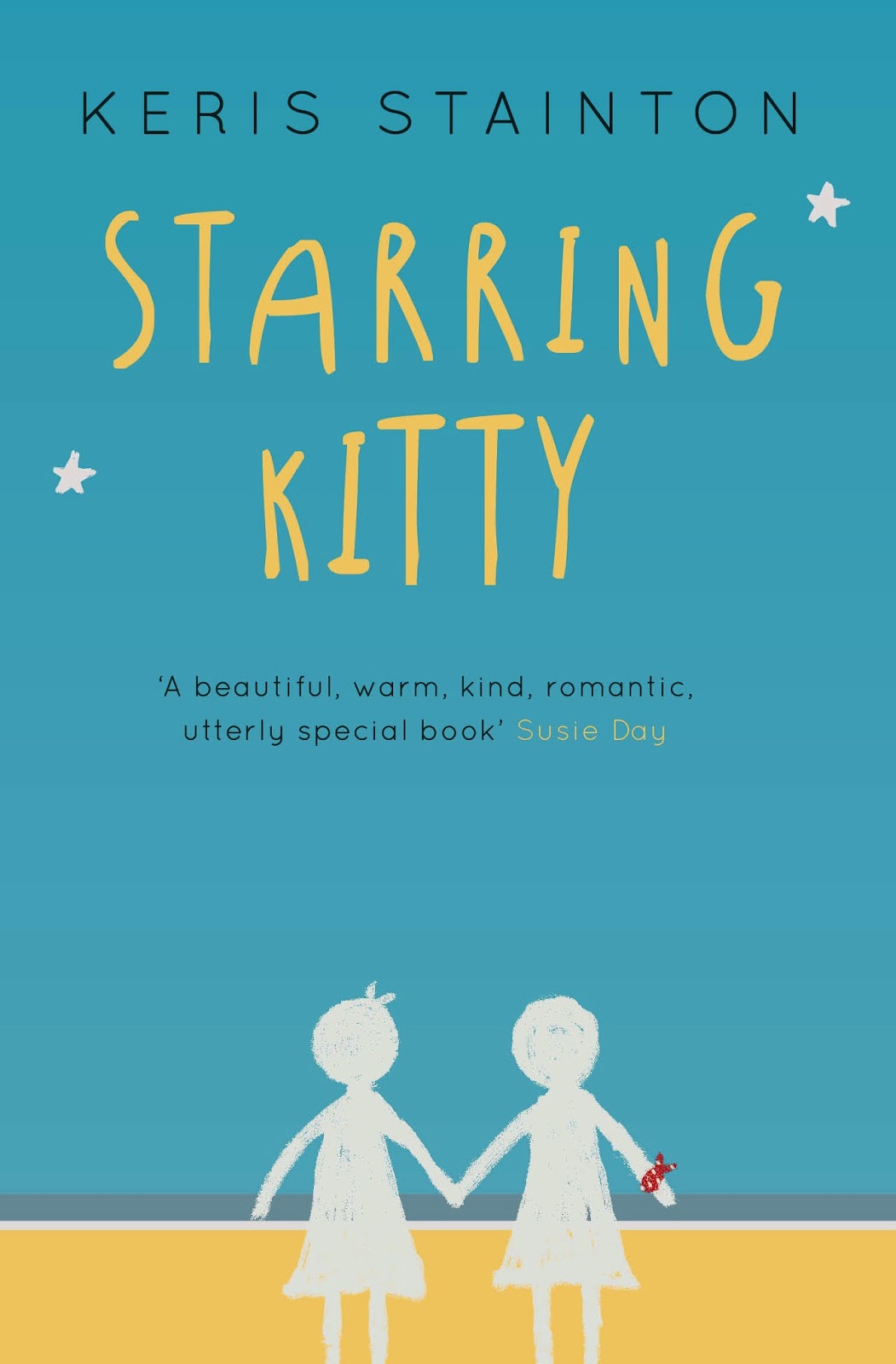 Hello Keris and welcome to the Catnip Lurve Cafe! Feel free to have a coffee or one of my homemade Catnip love buns.

So first, tell me a bit about you and Starring Kitty.


Just give me a minute to stop sniggering at "love buns"... Hello! I'm Keris, I live in Lancashire with my husband and two small-ish sons. I'm obsessed with American TV and Twitter. My new book, Starring Kitty, is about three friends who enter a film competition and what happens when one girl (Kitty) finds she has feelings for another girl...
Do you have a storyline in mind or do you create your characters and see what they do?

I hardly ever have any story in mind. Maybe a tiny bit. I almost always start with a character or setting. I start writing and after a few thousand words, panic that the book's not about anything. Eventually, I start to see patterns and connections and ideas pop up (usually when I'm in the shower or washing the dishes) and, eventually, it's all fine. This happens every single time, but I never get used to it.
Tell us a bit about Kitty, Hannah and Sunny and how you came up with them.
Kitty is a worrier, dealing with her mum's illness and her fears about her feelings for this girl she barely knows. Hannah seems much more confident, but she's the kind of girl who keeps everything inside... until it bursts out. Sunny puts herself under a lot of pressure, not least because she wants to keep everyone happy. They've been friends since primary school and live in a slightly faded seaside town.

I can't really remember how I came up with them. Kitty and Hannah were partly inspired by a photo I saw in a magazine. All three were partly inspired by girls I've met on school visits. And one of them was also partly inspired by a book blogger I know and love. So they're a bit Frankenstein's monster-ish. But in a good way.
I felt like Kitty's relationships with her best friends were just as important as her relationship with Dylan. Is this something you thought about?
Oh absolutely. I still remember those intense teen friendships, how you can spend all your time together, but still not necessarily know what's really going on with each other. Something I think about a lot is how when I was a teen, I was often scared to talk to my friends about more serious things because I wasn't sure whether they were "normal" or not, I didn't know how they were going to react. You don't want to risk the friendship.
Something I've found hard in writing romance is building the sense that two people have fallen in love when you have only the length of a book! (Whereas we had plenty of episodes to make us really care about Pacey and Joey or Tim and Dawn). Do you have any tips for romance writers for creating those couples that the reader roots for?


Ummm... no? I'm glad you've mentioned Tim and Dawn though, because that relationship definitely inspires me when I'm writing. Just the little looks, noticing things about each other. I think that makes all the difference.

I'll be cryptic to avoid spoilers, but my favourite Kitty/Dylan moment involves Google Maps! Do you have a favourite scene or one that you think really sums up their relationship?

Aw, I love that scene too - thanks! (Also, I spend a lot of time "travelling" via Google Maps.) I have a soft spot for the bit near the beginning where they meet on the beach. Kitty's discovering how expressing her feelings (by throwing rocks) can actually make her feel better. And Dylan jumps off the wall to the beach, rather than clambering down cautiously, like Kitty does. That probably doesn't make any sense to anyone who hasn't read the book...

The next book is Spotlight on Sunny, out early next year. Can you give us a taster of what is to come?

Er. You know above when I said about not knowing what the book's about? And panicking a bit? That's where I am with SOS (!) at the moment. Even you saying "early next year" gave me the wiggins. Also, almost anything I say will be spoilery. I can say that there's a new setting and some new characters, including a very lovely boy and a not so lovely girl.

MAKE YOUR OWN ROMANCE

Now we are going to play a little game of Make Your Own Romance! We are each going to select our favourite fictional ingredients to make our ultimate love story recipe.

Favourite couple (I will allow TV shows as well as books):

Coach and Tami Taylor from Friday Night Lights. Adore them both.

Liz:
Georgia and Dave the Laugh from the Georgia Nicolson Diaries by Louise Rennison. I spent ten books wanting Georgia to forget about the Sex Gods and the Lurve Gods and realise Dave and his clown nose would be the one to have her laughing away on a fast camel.

Supporting characters - you need to populate the book with some of your favourite fictional romance characters otherwise the main couple will get lonely. These can be hilarious characters, evil people to stir things up, people you really fancy - anyone! Please pick two (although more are allowed).

Keris:
Because I just mentioned Friday Night Lights and then you just mentioned "people you really fancy" I literally can't think of anyone but Tim Riggins. The most perfectly gorgeous misunderstood bad boy. *fans self*

Amy Poehler is my dream best friend, so I'll have her too.

Liz:
Lydia from Pride and Prejudice (because she seems like fun), the nurse from Romeo and Juliet because none of my characters so far are very organised and she can make sure the plot stays on track, and Dawson Leery from Dawson's Creek, to analyse everything and because if things got all intense and emotional, he could break the tension and make everyone laugh by doing this:

Liz: Lizzie and Darcy's eyes meeting over the piano in the BBC Pride and Prejudice.

Keris: When Nick and Jess first kissed on New Girl. I rewound it and watched it again. And again. And again. That was a heck of a kiss. I also always always well up when Rachel crosses the room to kiss Ross in The One With the Prom Video.

Liz: Ron and Hermione. I think I actually yelped mid-read.

Keris: Weekend in New England by Barry Manilow. Shut up.

Liz: All I Want is You by Barry Louis Polisar

Happily ever after (or not) - favourite ending

Keris: Even though I have some issues with the film (waah for her beautiful shop!), I always cry at the end of You've Got Mail. "I wanted it to be you." Sigh. I'm such a Nora Ephron fangirl.

Liz: THE. NOTEBOOK. Although it was difficult to see because of MY SOUL SPILLING OUT OF MY EYES.


Keris' ultimate romance:
Eric and Tami are just friends (they claim) and spend their time coaching a football team, misunderstanding their bad boy friend Tim and talking to each other on the Internet without realising it's them. Their friend Amy, who works in local government, turns a local quarry pit into a football pitch and to celebrate locks Eric and Tami in a cupboard. They refuse to kiss, but then they do kiss later and it is the BEST KISS EVER and Barry Manilow's Weekend in England is playing. Eric runs across the football pitch to get to Tami's new year party and makes a passionate speech. Then she realises he is the man from the Internet and Phoebe says 'he's her lobster!'

Liz's ultimate romance:
Georgia and Dave's eyes meet over a piano and they start to fall in love, but are distracted when Georgia's sister Lydia, helped by an organised nurse, elopes with a sobbing Dawson Leery and shames the family. Georgia and Dave get past that and finally kiss in the middle of a war with an evil wizard (while the Juno soundtrack plays). Then it ends in heartbreaking Notebook fashion, with the crying led by Dawson.

What do you think of our homemade romances? Have we missed any key romantic bits? Let us know your chosen bits below!

There are lots of lovely love-shaped things going on right in the Romance Festival - just head here to take a look and follow all the action on Twitter with #Romance14. Also check out Lydia Syson's amazing blog post on putting the political in to romance - here!

And look out for Dylan and Kitty (described by one blogger as 'ridiculously cute') - coming your way on 10 July! 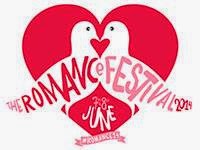