Why I commissioned... THE STOLEN SISTER 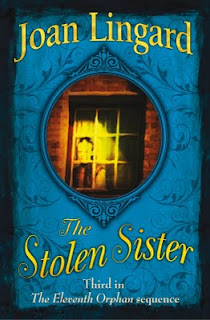 Twitter-style summary: When Rosalind is kidnapped, her sister, Elfie and Joe must uncover the mystery of her disappearance before the family falls apart.

Joan Lingard is a Writer. She writes a novel a year and she is one of Catnip’s most prestigious authors. Many people know of the Kevin and Sadie books based on love across the barricades of a divided , but the Elfie novels, which started with The Eleventh Orphan, is the series she writes for Catnip. The first book shortlisted for many awards, including the 2009 Royal Mail Scottish Children’s Book Awards and the second The Chancery Lane Conspiracy was warmly received amongst readers and booksellers alike.

Like the first two books featuring the irrepressible Elfie, The Stolen Sister’s appeal lies in Joan’s instinctive understanding of her audience. Her skill is subtle and hard to pin down and this is exactly why I think these books work so well. The Stolen Sister cleverly weaves together historical truths with vividly imagined characters so that you become immersed in Elfie’s turn-of-the-century Victorian world. Joan doesn’t go straight for the populist Victoriana you might be familiar with – instead she focuses her attention on an unusual family set up. Elfie lives with the Bigsbys and ten other orphans at The Pig and Whistle pub on Green Lanes in Stoke Newington. Only Elfie is not like the others, for she has family too. And so we are lead to Elfie’s (half) sister Rosalind, daughter to Elfie’s once well-to-do father (you’ll have to read the others to find out what happened) – a child given the privileged upbringing that Elfie lacked and whose kidnap is the focus of the novel.

The plot twists and turns but Elfie and her best friend Joe are there at every turn to guide us, navigating the bigger stuff such as racism (Joe is black) and social depravity, and the smaller stuff, such as old feuds with former friends, and villainous rich grandparents...

The longer I spend writing this post the more aware I become of Joan’s skill. She covers an amazing amount in such an accomplished, entirely comfortable manner that it’s hard to even begin to convey the level of her ability as a writer – sorry – Writer.

The skill is in the writing, not my analysis of it. Go read the book(s).