Why I commissioned… MAPHEAD 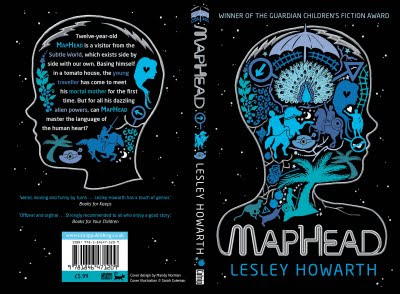 Twitter-style summary: Young MapHead is a visitor to Earth who can flash images of the world across his skull. Special though he is – can he map the human heart?

The Catnip list features some of Lesley Howarth’s original fiction in the form of Bodyswap: The Boy who was 84 and Swarf as well as re-issued collections of short stories, Tales from the Sick Bed, but it is this former Guardian Prize winner for which she is perhaps best known.

This is quintessential Lesley. Her writing is unlike any I’ve ever encountered; it’s as if she’s sees the world in a different way from everyone else yet, somehow, sees the real truth of it. It is this gap between the easily accessible and the harder-to-reach reality on which Lesley thrives.

MapHead is a young boy like any other, searching for his place in a world that he hasn’t quite come to terms with. In this instance this could be because he is a visitor from another world – the Subtle World – and the fact that his father Powers Boothe has been solely responsible for his upbringing. Powers is a strong and intelligent father who tries to demonstrate the truth of everything, for example a Catshake is a perfectly balanced nutritional meal, (yes, you’ve got it: a milkshake made of cat) and one that MapHead should not be emotional about consuming. Yet as the story evolves, we come to see that Powers’ love of facts does not stop him from shying away from the truth of things when it comes to MapHead’s human mother.

MapHead is a wonderfully sweet and sympathetic main character and it won’t matter to you that his grasp of language is slightly shaky at times, nor that he has the power to flash images of maps across the skin of his head (I imagine it a lot like a projection on silk, but that could just be me…). You will be drawn in to empathising with him as he tries to fit in at school; when he finds his mother and yet can’t convince his father to visit her; and when he must make a heartbreaking choice.

This is not just a novel about a visitor from another world – it is so much more than that. It could be an allegory for any child’s entry into the real world, for anyone whose faith in their parents has been shaken when they discover they have been told half-truths to protect them from the full force of the whole truth.

And so we are led back to my belief in the power Lesley wields as an author – her ability to show us more than we see on the written page. Her command of language is subtle and clever, using it as she does to distance us and drawn us in; to make us cry and to smile; to keep us turning the page. Her work is not always easy to read, but like so many things that one has to work for – when you get there, the reward is that little bit sweeter.