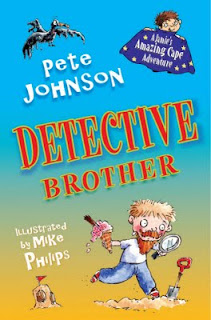 Detective Brother is the third book in Pete Johnson's Jamie's Amazing Cape series for 7-9 year olds. The first was a re-issue of his excellent Bug Brother, but at Catnip we don't do things by halves (or thirds in this case) and we loved the characters in Bug Brother so much that we commissioned Pete to write two brand new adventures for them, Invisible Brother and this.

Written in the first person from Jamie's perspective I think any reader can instanty identify with Jamie's relationship with Harry. Jamie's a good kid, the sort of son parents would be perfectly happy with if it weren't for his younger but – grr – taller brother, Harry, who's always winning sports trophies, squealing on Jamie when Jamie tells him to go away and generally bugging his brother. When Jamie discovers a magic cape that grants him 7 wishes a day (but not necessarily every day – it's a tempermantal magical object), he thinks this should change things. It doesn't. Harry is still just as much of a pain as before, more so in fact because, like younger brothers everywhere, he wants what his older brother has.

I love this series for the chuckle-worthy bickering between Jamie and Harry – Pete Johnson captures the perfect tone for squabbles and his dialogue is used to great effect set against a narrative that glides along at exactly the right pace. As the cape causes more trouble than it's worth you're drawn into off-the-wall adventures where the characters behave just the way the reader might. Jamie's sensible bestie, Reema (who is shock horror a girl), provides "brilliant ideas" to get the boys out of trouble and into (slightly batty) Aunt Nora's good books.

Lively line-drawn illustrations by Mikes Gordon and Philips add that little bit of visual humour, helping along the imagination and providing that all important break for the slightly timid reader.

A series with excellently empathetic characters and one of the key elements for a book aimed at this age: a direct line to the funny bone.